The upper and lower branches of the Clear Fork of the Mohican river offer opportunities to test your abilities to fool the wariest of all trout, the brown. I have fished these waters for 25+ years and have knowledge of the best places, flies and presentations needed to put the odds in your favor. Fishing almost daily, when water conditions have permitted has led to the insight needed to have a great day on the river. Whether a local angler looking for more information or an out-of-towner looking to make the trip worth your drive, I will give you the benefit of my experience to hopefully give you a trip to remember.

The waters of both the upper and lower sections of the Clear Fork River are typically able to be fished
with good success from early October through the winter and spring months through to mid-July. During
the summer months and into early fall, the water temperatures can rise to levels that put stress on any
trout hoping to make it through to the colder months. Along with the warmer water, flows drop to their
lowest levels of any time of the year and are extremely clear. This makes the fish extremely wary and
difficult to get to take a fly.

Due to these factors, our guiding season is from October through July with a shut-down period of August
and September. In addition, if conditions dictate that the river is not safely fishable when you wish to
book a trip, we will discuss options that will hopefully meet your schedule.

Our goal is to provide you with the best possible experience out on the river while maintaining a healthy
fishery here on the Clear Fork.

The Lastest from the River

Just a quick note to say thank you to all the clients that we’ve enjoyed the company of these last 12 months. You all have made the day out on the river such a great time. Yes, it’s about the fishing, and yes, even catching fish, but there’s something about the fact when you spend 2, 3, 4 or 5 hours with someone, sharing a common interest, that you come to the realization that it’s a joy to just get to know some new, good people or catch up with some old acquaintances. I hope you have enjoyed our time together as much as I have. I hope we have the chance to get together again in the future. We’re also looking forward to meeting our future fishing friends sometime over the next 12 months out on the river.

The river has fished well since temperatures dropped low enough to safely get out there after them. Minimal rain, however, has left the river low and clear. The usual techniques have been less effective in such conditions. Fortunately, the midge activity has been better than it has in recent years. Almost daily for the past month, there has been a hatch. Dimples dot the surface of the slower sections of the river as fish sip these little bugs as they gently drift by. If timed correctly, the action can be non-stop.

Since many of these cooperating fish are recently stocked, we are making sure to use only barbless hooks, even on these flies that are as small as #24. It’s important to keep these eager fish as healthy as we can. We’ve observed some of these young fish that have been permanently damaged by mishandling. Please do you part to preserve this fishery by whatever means you can. Barbless hooks go a long way towards achieving that end.

The midge action will more than likely continue well into winter. If and when flows pick up, we’ll adjust accordingly. Regardless, the fishing looks to be promising from here on out. This is really the start of our season. Don’t shy away from getting out there just because temperatures are falling. Some of the best action might be just around the corner.

We look forward to getting out there with you soon! 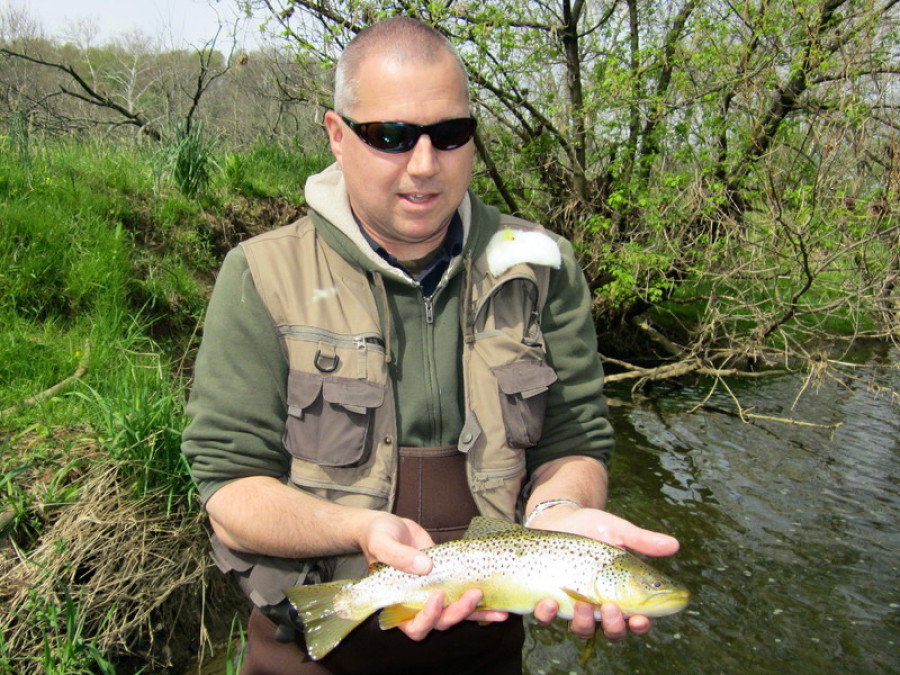 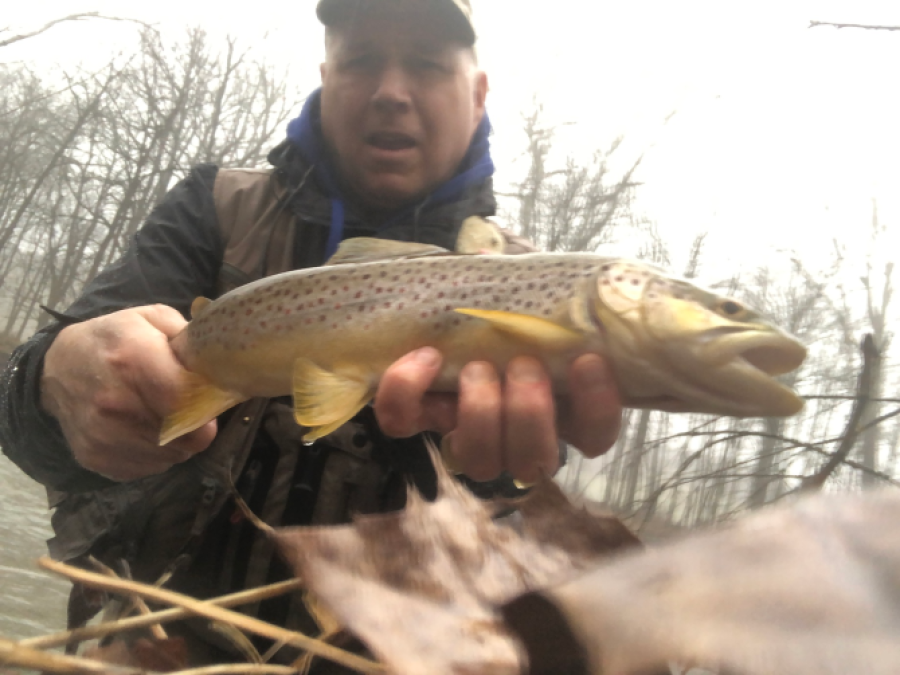 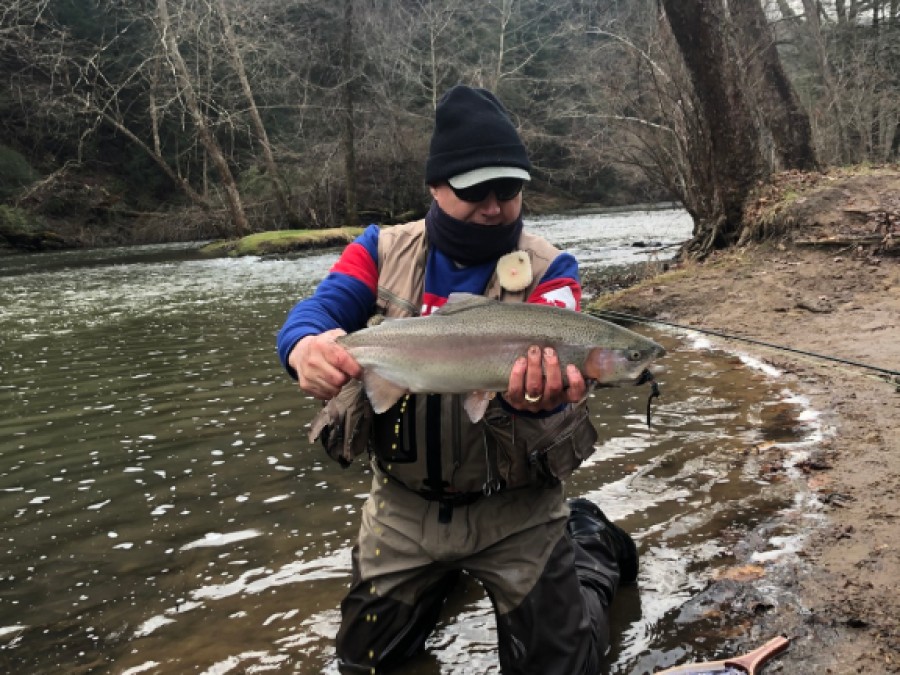 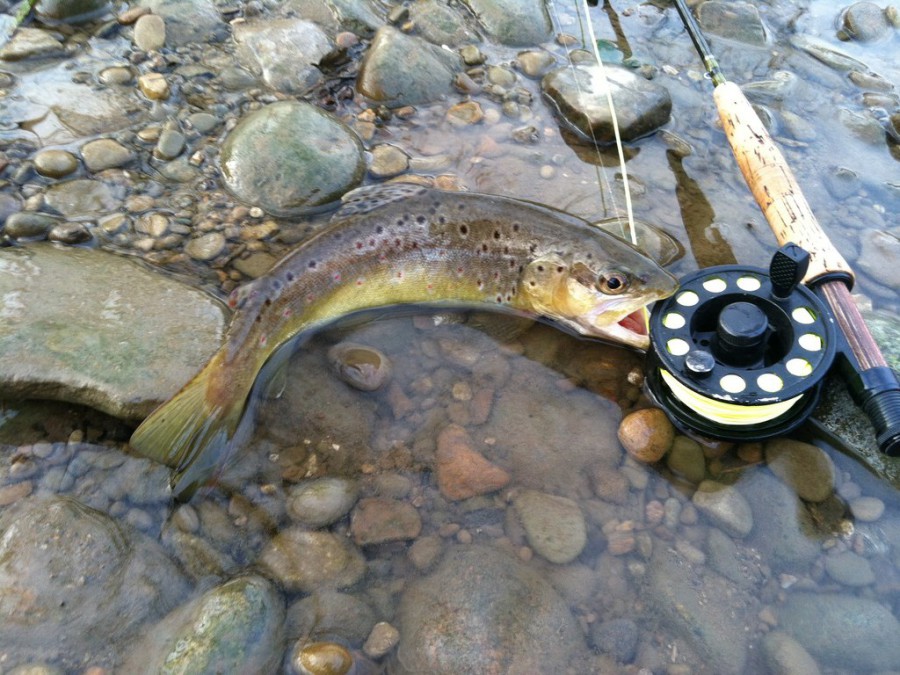 Worked on the car all afternoon. Up under the dash, twisted and contorted using my IPhone LED as a flashlight. Evening comes and I’ve had enough! Water temperatures are still in the upper 60’s from the series of cold nights recently. Time to hit the river. I always take my phone so as to take photos of the nicer fish landed. Not this time. Dead as a doornail from serving as a flashlight all afternoon. Needs to stay home on the charger. No biggie. I’m just gonna mess around with those nice little fish sitting in the seams off the main riffles sipping the assortment of dry flies coming off in recent days.

The little buggers are selective as all get out and my imitations are somewhat inferior. I land a couple in 45 minutes of fishing. The only hook-ups are reflexive strikes just as the fly lands on the water right in front of a nestled down trout. If they have any time to inspect the fly, they come up close, critique, and about face, slapping the fake with its tail before returning to the holding position. Still fun, but it’s time to try other techniques in some deeper holes.

Off comes the 7X tippet needed to present the dry flies so as to not make them look like they’re wearing a noose and on goes the 5X to start working a pheasant tail nymph. A couple of nice eager takes at the head of a pool. Fish are feisty, which is a great sign given the date. Working down towards the belly of the pool, I engage something with a bit more mass. He pulls hard and I return the favor as much as I can without exceeding the capacity of the 5X tippet. Loosen the drag you say? I would except there is a good sized branch down in the water just off to the side of the pool. Obviously the fish heads straight towards it. I attempt to turn its head away from its intended destination but he just strips line off the reel. After looping in, out, around and through, tying a very secure improved cinch knot around a thick branch, he, I’m sure, breaks off, leaving me to battle the branch he left as his replacement.

It’s starting to get a little late and the available light is diminishing. I consider re-doing my leader/tippet set-up, but my eyes are getting bad enough that a daunting task like that is difficult in 10,000 lumens. What I have left is the 4X end of my leader set up. I never fish 4X! That’s rope! My range is 5X to 7X. I think it’s what allows me to catch as many fish as I do. I think it’s also what allows me to lose as many fish as I do. Well, under the circumstances, 4X it is. On goes a bigger, heavier nymph. We’ll just chuck it out there and see what happens. Not much time left anyways.

Second cast to the heart of the pool. A drift towards the tail and then one strip back upstream towards me and BAM! A solid hit. I’ve had those before. This one seemed a bit different. More of a pull after the hit rather than the typical hyper head shake and short darting in one direction or another. This pull was in one steady direction. Strong and towards the big submerged branch. I give it the old one hand pull away from his intended destination but the only thing that changed was the rate of line peeling off the reel. He’s at the edge of the branch! A quick reach around with the left hand tightens down the drag followed by a two handed grab and lean putting one heck of a bend in the rod. It seems we were both frozen in time like that for an extended period. The rod stayed bent as did I and the leader above the water was pointed towards the edge of the branch. Finally after some time, I was able to rotate a bit more, pulling the fish away. Some give and take occurred in the center area of the pool until I was able to work him into the shallower riffle leading to the pool. When I got him there, I noticed something I’ve not observed on the Clear Fork before. Wait, make that two things: First, a dorsal fin and a tail sticking out of the water and staying above the surface. Second, a distinct gap in space between the dorsal fin and the tail of the same fish. Dang! This is a BIG fish. Probably the biggest ever! I can’t wait to get the hog to the shore and get some great pictures………………………… Oh. That’s right. The phone is charging at home………….. The one and only time I don’t have my phone with me. I’m never without that thing. Just ask my wife! Oh well (at least that’s what I try to tell myself), best be getting back to the task at hand. More give and take in the riffle. And, thanks to the 4X tippet that I never use, I’m able to eventually work him to the bank. For sure a “him”. This fish has a 4” hook jaw on him. I guess the length at easily over 20” but mark the spot on my fly rod to get the real number when I get home. I remove the hook, which was well set. Very unlikely this guy was gonna spit that nymph. The nymph looked big when I tied it on, but in the mouth of that fish, it appeared really small.

I put the big, orange, brightly marked, heavy, really heavy fish at the edge of the moving water to take in some final mental pictures. He gives me about 5 seconds of compliance and then flips his big paddle, turning, none to gracefully, back towards the faster water and on to the depths of HIS domain. I feel sorry for any other fish that might have thought about moving into his territory during his brief absence.

Somewhat sad to see him go and that I was not able to capture permanent images of him (there was a brief, passing thought of harvesting this fish amidst the panic of realizing I was phoneless, but that quickly passed), I noted the length marking on my fly rod and packed it in.

And so the legend is born. The lunker lurks. The Upper Clear Fork of the Mohican River does, indeed, have world class brown trout. And one at least 24.5”!

Guided trips are scheduled for any length you prefer ranging from 2 to 8 hours﻿ or more if time time slots allow. We'll take you to those sections of the upper and or lower Clear Fork that are prime spots for trout at that time of year focusing on spots generally overlooked or not frequently fished by the general public. For more information on rates and available dates, click here.

MFFGS is dedicated to offering quality fishing opportunities on the tremendous resource of the Clear Fork of the Mohican River while at the same time, preserving this fishery for all who wish to enjoy what it has to offer.